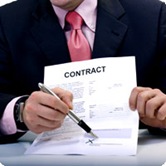 It now appears the Conan and NBC saga is coming to the end. It is being reported that Conan will leave NBC with a boat load of cash and will be free to have a new show on another network in the Fall. The specific terms of the deal have not yet been released, but they will definitely be detailed in a contract between Conan and NBC. Such a contract, often called a severance agreement, is used in high risk terminations as a means of avoiding costly and distracting litigation. END_OF_DOCUMENT_TOKEN_TO_BE_REPLACED

Just a few days ago, NBC announced that it was moving the Jay Leno Show from its current 10 p.m. starting time to 11:35 p.m. This move was prompted by complaints from NBC affiliate stations that the Show’s poor performance was damaging the ratings of their local news programs and their profits. The move of Leno’s show, however, will require moving the start of the Tonight Show to 12:05 a.m. Yesterday, Conan O’Brien released a statement objecting to the changes and threatened to leave the show. What can employers learn from this high profile, high-stakes predicament? END_OF_DOCUMENT_TOKEN_TO_BE_REPLACED

The current hullabaloo over the AIG bonuses is a good example of the old adage that bad facts make bad law, and is especially puzzling to employment lawyers, who understand that employment agreements are usually sacrosanct. While it is hard to muster any sympathy for AIG, the proposed political machinations to make AIG executives give back their bonuses have broad implications that should be of concern to all clear-thinking citizens. END_OF_DOCUMENT_TOKEN_TO_BE_REPLACED

What happens when an employee signs an employment contract that he doesn’t understand because it’s written in a language he doesn’t speak? Is he bound to its terms despite the language barrier? This was the issue taken up recently by the Third Circuit Court of Appeals in Morales v. Sun Constructors, Inc. The answer? Absent fraud, an employee is bound by the contract he signs, whether or not he understands the language in which it was written.

In Morales, a Spanish-speaking welder signed an hourly employment agreement when he was hired to work for a company, Sun Constructors. Eight of the thirteen pages of the agreement consisted of an arbitration clause, requiring any dispute to be resolved in arbitration. The problem? The contract was written in English, a language the welder did not understand.

After the welder was terminated for “dumping a bottle of urine from a great height on another contractor’s employees[,]” he sought to sue Sun Constructors for wrongful termination. Sun Constructors moved to stay the proceedings pending arbitration, a strategy that would only work if the arbitration clause contained in the employment agreement was found to be enforceable.

The court held that the arbitration clause was enforceable even though the welder was ignorant of the language in which it was written. It was, after all, the welder’s “obligation to ensure he understood the agreement before signing.” And the welder did not do a good job of fulfilling that obligation because he failed to take advantage of the bilingual person Sun Contractors arranged to have help him fill out his paperwork and he failed to retain his own translator (something he had done in the past). The court reasoned that “[i]t will not do for a man to enter into a contract, and, when called upon to respond to its obligations, to say that he did not read it when he signed it, or did not know what it contained.”

The moral of the Morales case is clear–never, ever, sign a legally binding document that you do not understand. If you are a Spanish-speaking employee, and are interested in translation, or other cultural services, please visit the Hispanic Emphasis Program, which provides local resources and contacts that can provide clarity on workplace issues.