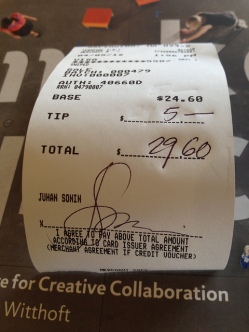 It’s Hard Out There for a Tip

Life as a waiter is hard. Rude customers, surviving the lunch rush, and then you get stiffed on a tip.  While it’s an afterthought for many of us as diners, tips are a waiter’s livelihood.  For those who have never waited a table or processed payroll for a hospitality business, here’s a secret:  waiters aren’t entitled to the same minimum wage as everyone else in the United States.

Under the minimum wage provisions of the federal Fair Labor Standards Act, employers need only pay wait staff $2.13 per hour, provided that the waiter’s tips are adequate to raise the waiter’s take-home wages to the national minimum wage of $7.25 per hour. If a worker does not earn enough tips to make minimum wage, the employer must augment their paycheck so they are making at least minimum wage.  But these low-earners are often targeted for termination because of their failure to perform.

The same is true for all workers who earn tips—wait staff, bartenders, valets, bellhops, and the like. Of course, it’s a bit more complicated than that, but there’s the gist.  And, for those states and municipalities with their own minimum wage rates, the story is generally the same.  But not for the District of Columbia!

Ballot Initiative 77 was approved by DC voters on June 19, 2018. This initiative will steadily increase minimum wage that is paid to tipped workers until it matches DC’s regular minimum wage in 2026.  Initiative 77 was fraught with opinions from all sides.  One factor that fuels the controversy surrounding the initiative is the fact that so little research and real-world practice is available. Very few states have laws barring this practice.  California never had a two-tiered system, and six other states (Alaska, Minnesota, Montana, Nevada, Oregon, and Washington) eliminated this model decades ago.  DC will be the first major US city to phase out a two-tier minimum wage.

A Bit of History

Although employers are required to bolster their employees’ pay so that they are making at least minimum wage, this is difficult to track. When tips are left in cash, rather than on a credit card, there is little or no paper trail.  Thus, it is difficult for employers to ensure they are paying their employees sufficiently, without paying more than the law requires.  What is more, the Department of Labor has a trickier time verifying complaints made by food service workers who claim they are not being paid their fair share.  This process becomes even more convoluted when tips are pooled and/or split with other employees (like hosts) who do not generally receive the same amount of tips as servers and bartenders.

According to statistics released by the Department of Labor (INSERT LINK https://www.dol.gov/whd/data/datatables.htm), the Food Service industry is considered one of the top offenders in the “Low Wage, High Violation Industries” group. In the 2017 fiscal year, food service employers were found to owe $42.9 million in back wages.

It is hoped that Initiative 77 will take the guesswork out of calculating tipped employees’ salaries. It will begin increasing the sub-minimum wage (which is currently $3.33 in DC) by $1.50 every year until it is $15 in 2025, and equal with regular minimum wage in 2026.

There is some fear that this new initiative will hurt tipped workers. In 2016, Maine approved a similar ballot measure to gradually increasing the sub-minimum wage over the course of 8 years.  But after the measure passed—and before it went into effect—restaurant workers claimed that they were seeing a decrease in the amount they were being tipped (INSERT LINK https://www.vox.com/2018/6/19/17474932/tipped-minimum-wage-impact-dc-initiative-77).  That stands to reason, as some of the increased cost of labor is presumably being passed onto customers in the form of higher food prices, which may have driven down tipping rates.  Lawmakers reversed the measure six months later.

But it is unlikely Delaware will be following in the Capital’s footsteps anytime soon. A bill to raise Delaware’s minimum hourly wage to $9.25 was introduced this year; however, it failed in the State Senate on March 20, 2018 (INSERT LINK https://www.delawareonline.com/story/news/politics/2018/03/20/minimum-wage-hike-fails-delaware-senate/441332002/).  Similar initiatives have failed in years past.  Sen. Robert Marshall, who introduced the 2018 bill, aimed to raise the Delaware minimum wage by 50 cents this year and another 50 cents next year.  Notably, his measure excluded Delaware’s tip wage, which has been at $2.23 since 1996.  Regardless, the bill failed to get the 11 votes needed to pass (receiving only 10).

It will be interesting to watch our Southern neighbors slowly move away from a two-tiered system. Most likely what will happen is employees will ultimately realize higher wages.  However, much of that financial burden will be put on patrons, in the form of increased menu prices.  But patrons should remember, you’re helping to pay the salaries of your wait staff regardless of their pay structure.  When you’re supplementing wages indirectly through the price you pay for food, or directly through the tips you leave, customers will always remain the essential element in the success of a restaurant, and whether its staff gets paid!