Today’s post is more of a rant than anything close to a legal analysis.  Yesterday, Mark Hansen of the ABA Journal reported about a sentence issued by a judge in Halifax County, N.C.

The defendant, a 21-year-old female, Tonie Marie King, pleaded guilty to being drunk and disorderly and resisting arrest.  Police were called to the scene in response to a call alleging that King hold stolen beer from a convenience store.  When police arrived, King put up a fight and kicked the arresting officer. 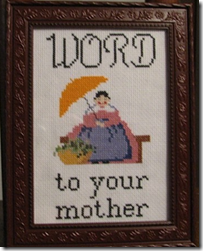 Judge Brenda Branch sentenced King to 45 days in jail but suspended the sentence in lieu of a one-year supervised probation, during which she may not possess or drink alcohol and-now here’s the kicker-she must write a two-page essay on “How a Lady Should Behave In Public.”

Let . . . me . . . think.  A “lady,” to me, invokes images of Victorian times, when “ladies” could be seen carrying a parasol and wearing delicate gloves.  The word also makes me think of the Disney movie, “Lady and the Tramp.”  So, basically, an adorable dog with big eyes sharing a piece of spaghetti with her beau.  Here’s what Bryan Garner has to say about it in his book, Garner’s Modern Legal Usage:

This word has become increasingly problematic.  Though hardly anyone would object to it in the phrase ladies and gentlemen, or on a restroom sign, most other uses of the term might invite disapproval . . .

And why is it that the word has been “so beaten down” in modern usage, to quote Edward N. Teall from his 1940 article, Putting Words to Work?  For the same reason that we counsel employers to not ask job applicants about their familial or marital status-because it doesn’t make a hoot of a difference.  Instead, we counsel employers to stick to job-related questions.  If the question does not provide insight into whether or not the applicant can perform the necessary duties, the question should not be asked.

The same maxim applies to the court-ordered essay.  The essay that the court should have ordered is “How a Citizen Should Behave In Public” or “Why It’s A Bad Idea to Be Drunk In Public” or “10 Reasons to Not Assault a Police Officer.”

But “How a Lady Should Behave In Public”-what response is that likely to invoke?  Well, if we look to Old Massachusetts: A Practical Primer for Daily Living, here are some possibilities:

Keep Your Arms from Going Astray.  Preferably with a fan but, when you cannot have one in your hands, it is better to keep the arms pressed lightly against the sides in walking or sitting.

Limit Your Observations.  A woman who is boisterous and loud-talking is almost unendurable.  A lady is, by nature, intended to be the gentler and restraining element.

Be Not Excessively Frank.  Do not take pride in offensively expressing yourself on every occasion under the impression that you will be admired for your frankness. Speaking one’s mind is an extravagance, which has ruined many a person.

Excerpts published at ConcordMa.com.   Folks, can we just take a moment to reflect on that last characteristic of a lady’s “proper demeanor”-“Speaking one’s mind is an extravagance, which has ruined many a person.”

Consider me ruined in that case because I’m about to speak my mind.  The judge’s order, however well intended it may have been, does more harm than good and, quite unfortunately, reflects a bias on the bench.  The judge-a woman, mind you-felt that it was perfectly appropriate to use the defendant’s gender in determining the sentence.  As readers well know, similar conduct by an employer would get the employer sent directly to the EEOC-do not pass Go, do not collect $200.

When imposing a “sentence” in the workplace (i.e., an adverse employment action), assume that gender is irrelevant because it almost always is. And then leave gender out of it.

And, just one more thing for this Friday-morning post, it is my wholly subjective opinion based purely on my own anecdotal experience but this kind of gender-based order would only come from a woman.  We really can be our own worst enemies.

No, I am not from the Midwest. Sex Discrimination Lives On.

A Turning Point for Women in the Legal Profession? Almost.

Gender Discrimination & Dress Codes. Who wears the skirt, I mean, pants in your office?

Are Women Attorneys Being Stricken by a Pantsuit Pandemic?