How important is office space to employees?  Very important, apparently, according to this article discussing a “summer office swap” conducted at a Boston-area advertising agency.  During the summer months at this forward-thinking firm, nearly every employee switches office space based on a lottery system.

There were a small number of managers with offices, and regardless of how high their pick was, they could not keep an office. However, who did get the office appeared to depend on an elaborate bartering system, which resulted in more lowly office types offering services such as babysitting, car washing, and coffee retrieval in exchange for a seat in a coveted manager office. 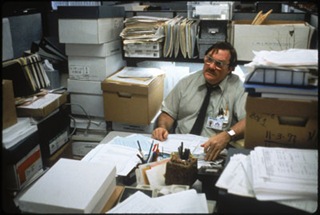 The article is a good reminder of how important office space is to employees. More than a few employment discrimination lawsuits have been based, in part, on the office (or cubicle) an employee is assigned to.

In 2003, there was a Delaware case involving a plaintiff who filed a federal lawsuit which entailed, among other things, his objection to an office space “auction” at University of Delaware – where the best offices would go to the highest bidder and the money raised would go into a fund for use of the Department.

More recently, I had a case where among a plaintiff’s evidence of “retaliation,” were claims that she was given a “dirty, dusty cubical walls filled with dust mites.” And of course, who can forget the movie Office Space, and Milton, whose most prized possession was his Swingline stapler, and whose cubicle was continually moved until he was eventually wound up in a dimly lit basement among the boxes.

The legal profession is one of the last standouts where a good portion of the employees – lawyers and paralegals – typically have real offices with doors: associates have window offices, partners have bigger window offices, and paralegals have interior window-less offices. I know this is unusual for most of corporate America. But as the Boston Globe article illustrated, even among cubicles there is a hierarchy: those closest to the window, most shielded from foot traffic, etc.

Employers should keep in mind the importance of office space to employees, and what a difference small changes can make. In this era of layoffs and belt-tightening, there may be simple and relatively inexpensive ways to reward your employees and keep them happy: think about small ways their work environment can be improved. Many (indeed most) employers are not cut out for the “summer office swap” conducted by the Boston firm – if this was ever attempted in a law firm, I’m quite certain it would result in a revolt that would make the Pakistani lawyers revolt look tame. Nevertheless, consider what might work for your workplace: access to natural light, modest levels of privacy, can go a long way to build employee loyalty.