As layoffs increase, so do claims of age discrimination. Age-based harassment, though, is less common.  A 49-year-old aide to former Ohio AG Marc Dann claims that Dann’s managers used profanity and called him a “dinosaur,” resulting in what he claims was harassment and age-discrimination.  This claim comes in the middle of an already scandalous period for the former AG, who has been accused of fostering an unlawfully hostile work environment. 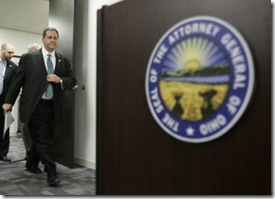 Dann (pictured) and some of his aides have been in the middle of a sexual-harassment scandal, resulting in the AG’s departure from office.  David Kessler, who has filed a complaint with the EEOC against the AG’s Office, said that the scandal supports his allegations of abusive behavior.

Kessler was hired in 1999 and investigated crimes against the elderly.  Kessler claims that, when he took office in January 2007, Dann installed new aides and things went downhill from there.  He claims that he was targeted because he had been hired during the prior administration, which Dann had defeated to take office.  Kessler says that he was told that he could either quit or be fired, so, in January 2008, he quit.

Then, in April 2008, Dann admitted to having an extramarital affair with a staffer and resigned amid allegations of a sexually hostile work environment.  Two female employees claimed that their supervisor had made sexual advances and comments toward them.  Those allegations triggered an investigation leading to other unsavory discoveries.

From a legal perspective, this recent claim is quite different than the original claims of sexual harassment.  Those claims were based on the allegation that the women were being treated less favorably because of their gender.  Here, Kessler seems to really be claiming that he was treated less favorably because of his political affiliation with the prior administration.  Unfortunately for Kessler, such discrimination in politics is often legal, depending on the nature of the position.  If Kessler was a top aide, in a position of trust and authority, then the AG likely did have the right to “discriminate” against him if the AG believed that Kessler’s political affiliations prevented him from giving his full loyalty to his new boss.

And that is where the age-discrimination claim comes in.  If Kessler’s claim for political association (a constitutional claim brought pursuant to the First Amendment’s Right to Freedom of Association), is tossed by the EEOC or the courts, he’ll have the age claim to fall back on.  However, given his actual age (49), the “back-up” argument may be hard to swallow.  Especially if the alleged harassers were older than Kessler.  If an employer really does harbor an age-based bias against employees aged 49 and above, it will soon run out of people to employ.

Then again, the allegation of direct evidence of age-based hostility, i.e., the “dinosaur comment” might be enough for the age-discrimination claim to survive, for now.